I’m starting a new hobby. Social media is too stressful. Fortune cookies, now, those are great. Not only do you get a super yummy snack, there are surprise words of wisdom within each one. Let’s take a look at the first one: ‘When the flowers bloom, so will great joy in your life.’ Well, we’re off to a pretty goo start. When the flowers bloom it’s spring, and with spring comes better weather, and with better weather comes GARAGE SALES! One of my favorite things. Also, when the weather improves, so does my Seasonal Affective Disorder, so that’s a big plus. AND more vitamin D, so I can escape all the *&%#%^($() sickness we’ve had this winter. Now with flowers comes seasonal allergies too….we won’t go there.

What’s the next one say? ‘You have the ability to overcome obstacles on the way to success.’ Well no crap. Don’t we all do that?! Every. Single. Day. But it’s good to know the fortune cookie people agree.

Next! ‘Your first choice is always wisest to follow.’ I think this is the Confucius way of saying ‘follow your gut’ which is always good advice. Had I done that in my younger years, I could have avoided a lot of grief. However, you shouldn’t just jump to a decision, give it some thought, but don’t overthink it. Did I just overthink this? Oh, yes. Yes I did.

Onward! ‘You may attend a party where strange customs prevail.’ Oh, now that has lots of great possibilities! It could be totally cool or totally awkward. Both of which aren’t boring, so I’m in! I do notice how they CYA’d themselves with ‘MAY attend.’ So…I may not get to go to this awkwardly cool party…darn those fortune cookie people!

And the next one…’You are only starting on your path to success.’ Seriously?! I’ve been working this hard for *cough* two decades only to be ‘just starting?’ Well crap. This one’s not so great. On the other hand, perhaps I am on a NEW path to success, so I have another two decades of greatness and great things ahead of me. Cool.

Next we have: ‘The near future holds a gift of contentment.’ Well it’s about time! I don’t think I’ve ever been content, so this will be a nice experience.

‘The current year will brig you much happiness.’ Wow, no holds barred there. Nice! I. Am. So. Ready. So far its off to a bit of a rough start, but the fortune cookie people say so, so here I am happiness! Bring it on!

‘Adjust finances – make budgets to improve your financial standing.’ Well that’s lame. What a ‘no crap’ moment. Come on fortune cookie people! You can do better than that. Let’s move on.

‘You will be recognized and honored as a community leader.’ That’s better! This has lot’s of possibility: rescuing the neighborhood after the zombies arrive, warlord when society falls, vigilante, being first in the annual town parade…

And finally, the last fortune for today: ‘Rely on long time friends to get you advice.’ We’re going to pardon the grammatical error and look at the heart of these mostly wise words. This could be quite true, because long time friends know you and your quirks, needs, issues, well. They might also be as clueless as you are. Just because you ask for advice though, doesn’t mean you have to follow it. And hey, they could come up with something really good! Plus, they’ll be there to post bail should things not work out as planned…

Well that was totally great! I’m now off to order a case load of fortune cookies on Amazon. Stay tuned! 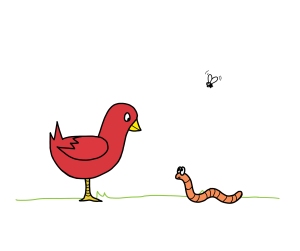 Bird was singing to the sky when up poked a  worm from the ground.

In his surprise, Bird forgot he was a bird. (Birds eat worms, you know.)

“I was asking your name,” replied Bird, “Not what you are.”

Bird paused a moment to think. “I will call you Wormie.”

“That seems to fit,” agreed Wormie. He sighed.

“I am Cardinal,” replied the bird proudly, fluffing his crimson feathers.

“See,” Wormie said, warming to his subject. “You’re bright and bold, and bird watchers look for you. I’m a worm. I dig through dirt and I’m not terribly attractive to most, except fish.” (He didn’t add birds as well, thinking he should keep that fact quiet for now.)

So Cardinal hopped and Wormie crawled, and after a while they came to a big oak tree with a hole in its trunk, way up high among the branches.

Cardinal trilled a lovely song. They waited. Cardinal and Wormie looked at each other. They waited some more.

“He likes to sleep when the sun shines,” Cardinal explained. “I’ll try again, closer this time.”

Cardinal flew up to a branch near the hole in the trunk and trilled again, louder.

From within the tree sounded scratching and mumbling. After a moment, a large, round bird exited the hole in the trunk with a great fluffing and ruffling of feathers. Large yellow eyes blinked uncomfortably in the sunlight.

“Owl, we have a question for you, if you don’t mind,” Cardinal said nervously, when he saw how grumpy Owl was.

In one smooth movement, Owl turned his head toward Cardinal and blinked.

“Um, yes, well, my friend, Wormie, there,” Cardinal pointed with a wing tip toward the ground, “wants to know what’s special about him. Um, worms, that is.”

Owl squinted, looking toward the ground, blinked again and shuffled his long, clawed talons, making Cardinal quite nervous. Then, Owl cleared his throat.

“Well, worms loosen the dirt, letting air and water in. They break down leaves and things in the soil to help plants use the nutrients.” Owl paused, thinking. “One earthworm can digest and fertilize 36 tons of soil in one year.  Worms are important to the health of plants,” Owl finished with an impatient flutter of his tail feathers.

“Oh!” trilled Cardinal, that’s wonderful! Isn’t it Wormie?” Cardinal looked down at Wormie, way below. Wormie looked up at Cardinal, high above.

“Sounds good!” he shouted up. “I guess I really am useful.”

“Correct. Everyone has a place in the world.” Owl yawned. “Mine, right now, is back in my nest. Asleep.” With a final ‘harrumph’, Owl shuffled back into his tree.

Cardinal hopped from the branch and swooped down to the ground. He landed with a soft ka-thump next to Wormie, who tried very hard not to flinch. It is rude to flinch at your friend’s arrival, even if he is a bird and you are a worm.

“See!” Cardinal said, with a flourish of his wings. “You are important, just as everyone is!”

Wormie nodded, smiling to himself. “I am,” he agreed, quite pleased.

Just then a fly landed nearby.

“Well,” the fly said, with a half-hearted buzz of his wings, “I’ve been feeling really useless lately. Unappreciated. Even…disgusting.”

Wormie and Cardinal looked at each other.

“Do you know anything about flies?” Wormie asked Cardinal.

“No. Do you?” Cardinal asked Wormie.

“No. I didn’t even know anything about worms!” Wormie exclaimed, watching their new friend Fly rub four legs over his big fly eyes.

“Maybe,” Cardinal replied uneasily. “But it’s your turn to ask him.” 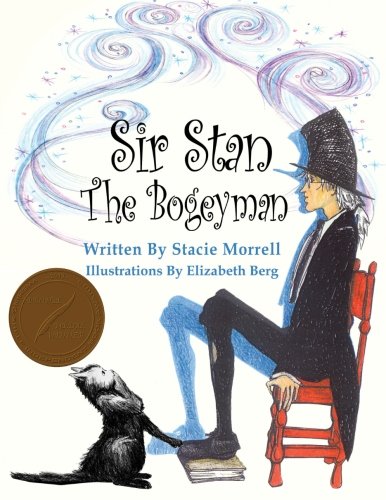 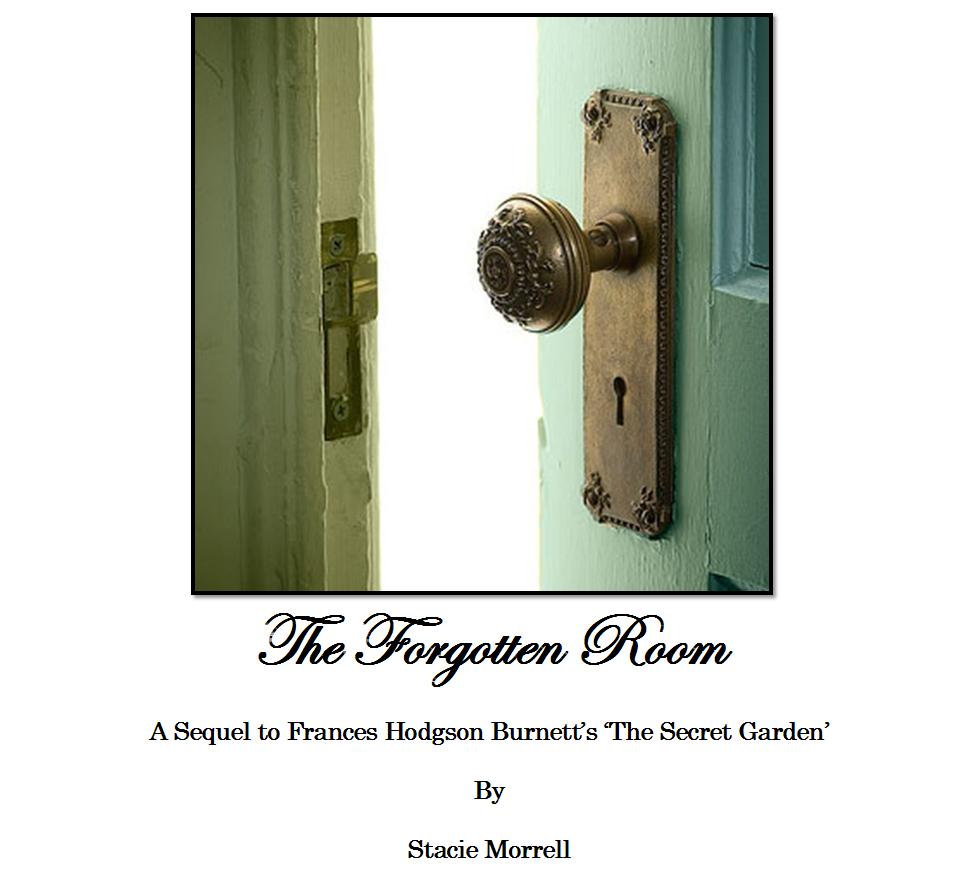 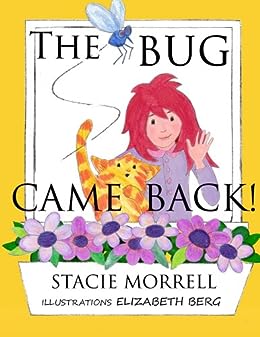